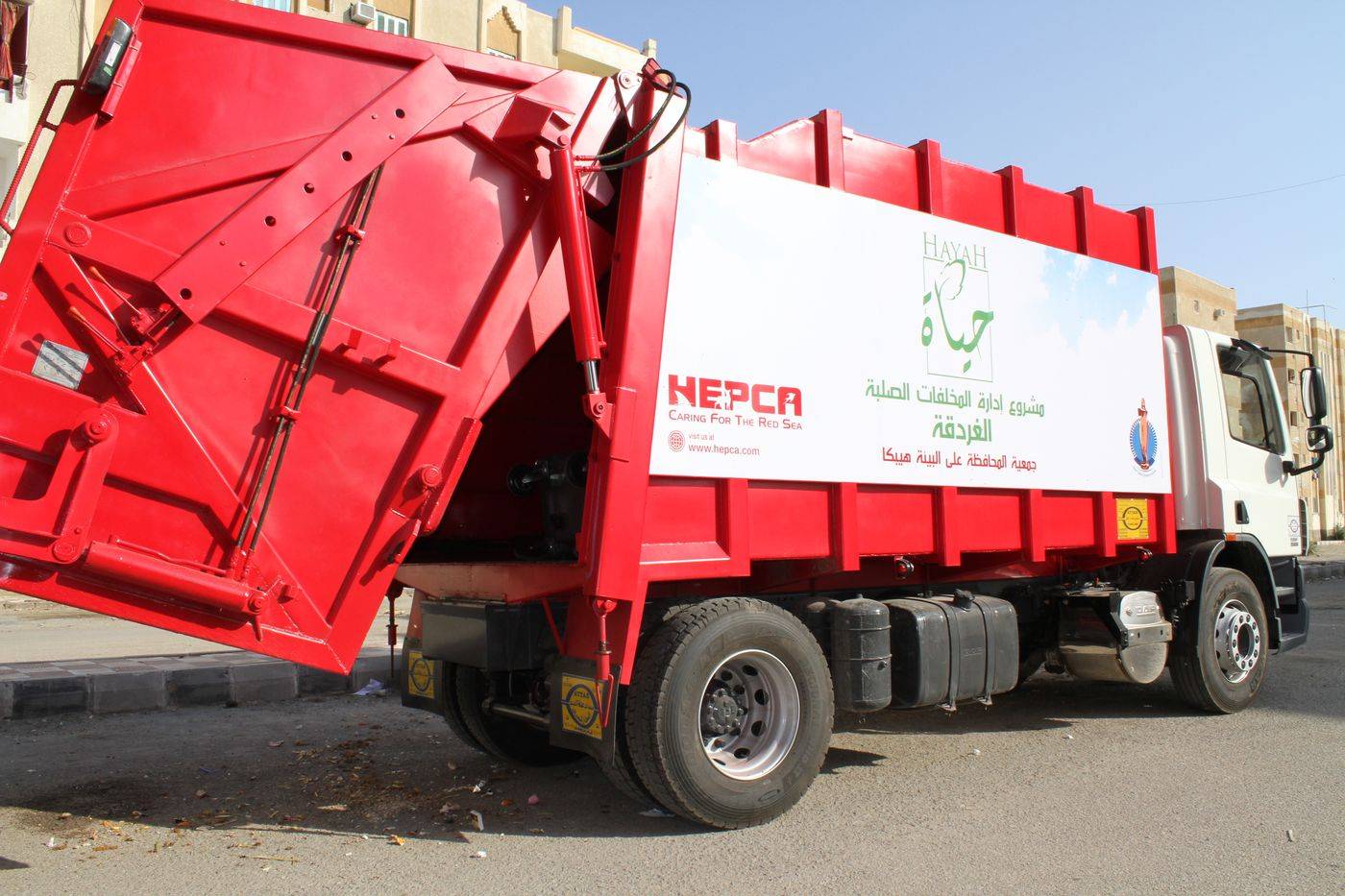 The Need for a Management Strategy

Ineffective solid waste management system has dire impacts on the environment locally and globally. Plastic bags and bottles are very often seen floating at many of our most popular dive sites. Plastics don’t fully decompose and break down into smaller pieces that can be ingested or absorbed by organisms through the food chain. In many documented cases marine mammals and turtles mistake these plastics for food and die a slow and painful death by choking or entanglement. In 2006, 70% of deceased marine turtles in the Egyptian Red Sea are believed to have died due to the ingestion of plastics.

Solid waste does not only impact mega fauna. Corals are often smothered by waste or shaded from sunlight, which is indispensable to their survival. The magnitude of the adverse impacts of solid waste on our ecosystem is alarming. If only 5% of the plastic bags disposed of in Hurghada end up in the sea, it is estimated that they would cause death to more than 250 seabirds and 25 marine mammals every month. Needless to say, the impacts on the ecosystem and on human health are disastrous.

An effective and comprehensive solid waste management plan can save our environment on a local scale by alleviating the disastrous effects of the solid waste on wildlife, and on a global scale through the preservation of the re-usable resources in the solid waste.

Usually, we are unaware of the entire “lifecycle” of “items” we use on a daily basis. Although, by carefully analyzing the matter you can begin to understand that even as a simple consumer, every move we make plays a role in undermining the equilibrium of the world’s eco-system.

Over 600 tons of rubbish is generated every day in varying regions of the Red Sea and until the initiation of HEPCA's solid waste management strategy, waste collection, disposal, and recycling was sporadic and unregulated. The lack of a proper management strategy in the Red Sea governorate had led to an unimaginable accumulation of waste throughout the entire area. To make matters worse, the generally strong winds blowing in the Red Sea resulted in dispersed low density waste. Piles of solid waste can be found in the desert and sea, which has devastating impacts not only for the people but for all the coastal ecosystems throughout the region to include the wildlife and their habitats.

In August 2009, a protocol was signed between the Red Sea Governorate and HEPCA; this protocol consigned the responsibility of Solid Waste Management in the Marsa Alam to HEPCA; giving HEPCA exclusive responsibility over waste collection, recycling, and disposal.

The Solid Waste Management strategy in Marsa Alam is a unique system in Egypt. This is the first time an NGO has become solely responsible for all aspects of solid waste management; benefiting both the environment, since HEPCA has taken on the project with environmental conservation as its priority, and the national economy as by giving HEPCA responsibility over the entire management system, millions have been saved from the governorate’s budget, as the system is financially self sustaining. HEPCA's comprehensive approach for the Red Sea was formulated in cooperation with USAID, the EEAA, the Association for the Protection of the Environment, and private sponsorships including The Coca Cola Company.

HEPCA developed a comprehensive system around its trucks to collect the waste along the 200km stretch of coast, a material recovery and recycling facility as the hub of the system in Marsa Alam for material segregation, and, as well, a novel social component, that entails the provision of much needed organic matter to goat herders along the coast.

HEPCA's success in the south has become a model for solid waste management and as a result the strategy has been expanded to Hurghada.

As part of the scheme in Hurghada, HEPCA started with a test initiative known as the Hadaba Pilot Project. In February of 2010 HEPCA took on the Hadaba Cleanup Campaign; a yearlong campaign aimed at implementing an efficient solid waste collection system and more importantly to provoke a change in the solid waste disposal habits of the community in this Hurghada district. HEPCA commenced the first phase of this daunting feat of solid waste management in Hurghada February of 2011 and is committed to 2016.

Hurghada is a coastal city bestowed with some of the worlds most diverse and exquisite reef systems, making its economy almost entirely based on tourism. With the exponential growth over the last two decades, Hurghada has grown from a coastal town with a small administrative center, a fishing village, and less than a handful of touristic facilities to a fully-fledged bustling city with 150 hotels, a resident population estimated at 300,000 people with a projected annual population increase of 9.8% and an estimated 3 million tourists every year, which on average produces more than 450 tons of waste a day.

With the takeover in 2014 of the sanitary waste site of Hurghada, HEPCA's management plan, as in the south, is in full force which focuses on proper collection and disposal, material recovery, and recycling which has been precisely customized to the needs of the city. The plan takes into consideration the district structures, population densities and socioeconomic standards and yet remains conscious to the future growth of Hurghada.

The Model for Solid Waste Management

HEPCA’s line of attack in solid waste management in the region has become a model for Egypt; where environmental conservation and public health protection are the driving forces behind the initiative.

Vehemently important to HEPCA, as with all its initiatives is the ability to create income and employment for local communities. The solid waste scheme has done just that. HEPCA's solid waste team hovers at about 700 staff members. Each member receives a healthy salary package that includes health insurance and additional benefits.

A real change in individuals' daily practices is a necessary component toward the cleanliness of the region; it would be naive to assume that the goal to protect the biodiversity and marine habitats will trigger a change in the social paradigm. Although environmental conservation is the ultimate goal, the campaign also focuses on the public health risks associated with the lack of an effective solid waste management system as well as the economic impacts of environmental degradation, lack of hygiene, and the aesthetic pollution caused by pileups.

The work in solid waste is one that is met with challenges on a daily basis but HEPCA is committed to the task and is fully aware that the work could not progress by itself. Community participation in SWM is the key to a sustainable and integrated project. HEPCA's bilateral aim is to have as many sectors of the community as possible actively participating in the project. Most importantly, we want to create a feeling of ownership for the project among the citizens, whose waste is managed and whose local environment is improved by the project.

Though, one thing is a given, the environmental backdrop is draped with rugged mountains and a spectacular sea with an army of red equipped with an artillery of vehicles, sweepers, and bins that continues to tell the story of solid waste management in the Red Sea.

The Future of Solid Waste

The initial target of the solid waste management has been achieved but the work does not stop there. Potentially there are many types of material recovery facilities ranging from those based upon manual segregation to those which are fully automated; while recycling factories can be established for a wide range of products.

The establishment of a carbon development project (CDM) is part of the long-term goals of the project. The construction of a biogas electricity generation system can potentially fuel a significant of Hurghada’s power requirements while significantly reducing carbon emissions. Potentially the reduction of the tourism sector’s carbon footprint can make the industry carbon neutral.

The model for the Solid Waste management shall also expand geographically in order to insure that the entire Egyptian Red Sea coast, not to mention all of Egypt, is protected from the highly destructive threat imposed by mismanaged solid waste schemes.

The scheme to clean up the Red Sea began in Marsa Alam with a full fleet of vehicles, workers, and a material recovery facility.

HEPCA goes organic in establishing an organic waste program to provide feed for the Bedouin livestock.

No to Plastic Bags

The attention soared over the mounting solid waste issue with a community involved campaign that distinguished the Red Sea as the first plastic bag free governorate in Egypt.

An initial step in the solid waste management scheme for Hurghada was an action-oriented yearlong pilot project HEPCA launched known as the Hadaba Cleanup campaign which aimed at implementing an efficient collection system.

HEPCA took over the responsibility of waste management for the entire city of Hurghada which has an estimated population of 250,000 people and produce nearly 450 tons of waste on a daily basis.

HEPCA adds smaller trucks in their fleet to enter into hard to reach areas and neighborhoods.

Hepca replaces all its waste containers from plastic to metal to prevent them from being moved and fortifies the commitment between the community and the solid waste management system.

The tour operator, TUI, donated 280 waste containers for Hurghada that includes 250-40 liter containers attached to the street poles in the touristic areas and 30-1.2 liter metal waste containers in the residential areas.

Hepca takes over the management of the sanitary waste site of Hurghada.

HEPCA adds another Material Recovery Facility in Hurghada as part of the solid waste scheme to segregate solid waste materials for recycling.

New sweepers are added to the fleet in Hurghada which collects small particles of debris more efficiently.

The solid waste scheme expands to include the community compound of Sahl Hashish.

HEPCA launches The First online service for Reporting the Garbage Problems and complains and solving it in less than 24 hours via the Facebook page Clean Hurghada .

HEPCA participated in 'Helwa Ya Baladi' initiative alongside with many ministries, state institutions and civil society institutions. The initiative was the largest one for cleanliness and beauty of the streets, and all the governorates of Egypt were involved in it.

HEPCA efforts to sustain the conservation of Red Sea environment was culminated with the inauguration of the recycling plant in Hurghada in an attempt to preserve the Eco system and benefit from managing the Solid Waste of the city that is from 350 – 450 tons a day in the most efficient way.

The recycling plant is equipped with the latest and most advanced and machines used in the Netherlands and Germany, with a capacity of processing 400 tons of solid waste a day to suit the needs of the Red Sea governorate.

The recycling process goes through five fazes, it starts with waste weight, then it goes through filtering room to separate organic products, plastic, metal, and paper. After the filtering each pack is condensed, wrapped, and distributed to reproducing factories within Egypt.

HEPCA’s started the first Solid Waste Management in Hurghada on the 10th February 2011. The first phase entails waste collection from the entire city, HEPCA has committed to assume responsibility for waste collection in Hurghada aiming to expand its activities to encompass a comprehensive solid waste management system to be applied in the Red Sea that includes everything from material recovery, to recycling, to proper disposal and potentially the collection of landfill gas and electricity generation.