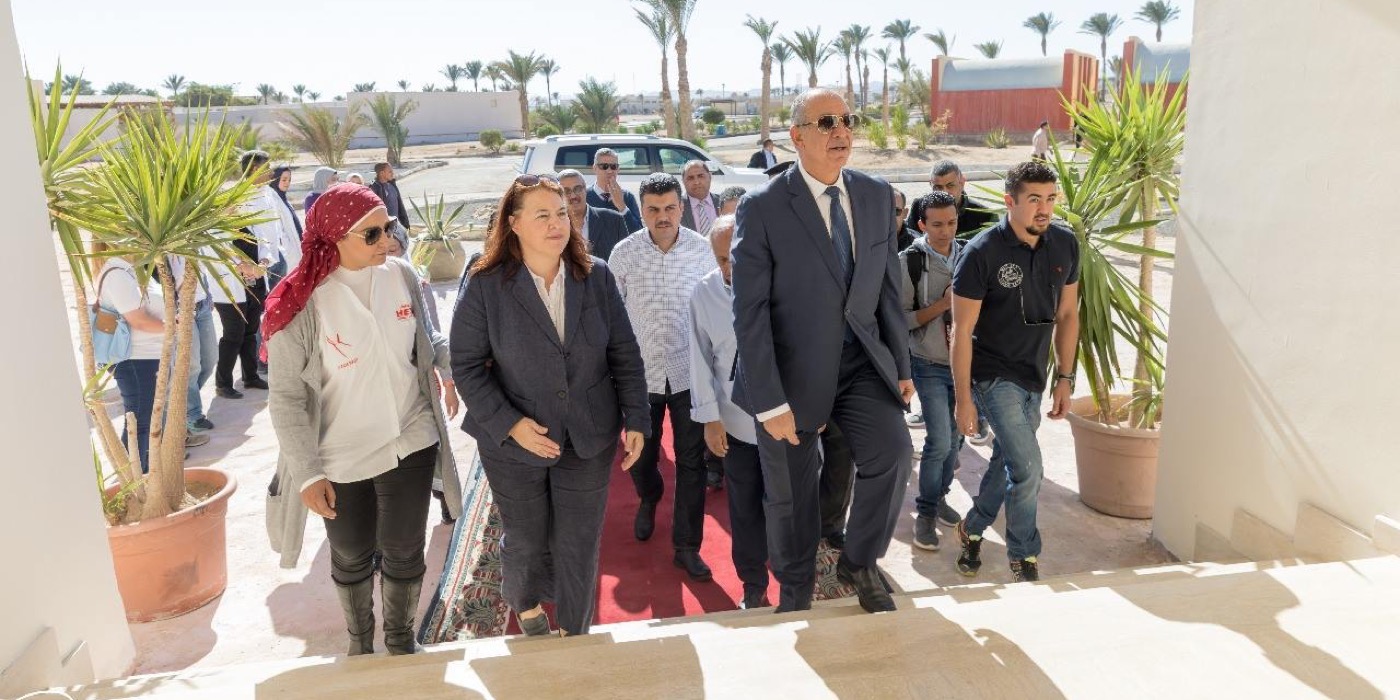 The Opening of the Red Sea Wonders Museum in Port Ghalib: A new achievement for HEPCA

The Red Sea Wonders Museum is part of HEPCA’s Educational Research Support Center in Port Ghalib. The museum aims to introduce the ecosystem and biodiversity of the red sea and the culture of the Bedouin community by using modern technology that communicates directly with visitors. The museum is part of HEPCA’s sustainable development activities in the Red Sea “Life 2”. The museum was inaugurated by General Ahmed Abdullah, Red Sea Governor, and Mrs. Rebecca Latorraca, USAID Deputy Director of Mission. It is divided into several parts; The first part is introducing the definition of human and cultural diversity. The second part is the historical side of the Red Sea in terms of the geological origin and its vital role in the migration of early humans from the Horn of Africa to the Nile Delta in Egypt, to the North African countries. The third part is about the diversity of marine and land species in the Red Sea.  The fourth part includes the diversity of habitats in the marine ecosystems, and the relationship of the sea with land. The final part is introducing the unique species and the most efficient way to sustain its habitats. The museum is connected to the Aqua culture Lab where HEPCA succeeded to spawn and grow Tridacna ( giant clams ) for restoration. HEPCA considers this as a new achievement and an addition to the educational system, nonetheless, it will raise the environmental awareness for visitors and educate them on the natural treasures and unique cultural diversity of the Red Sea. 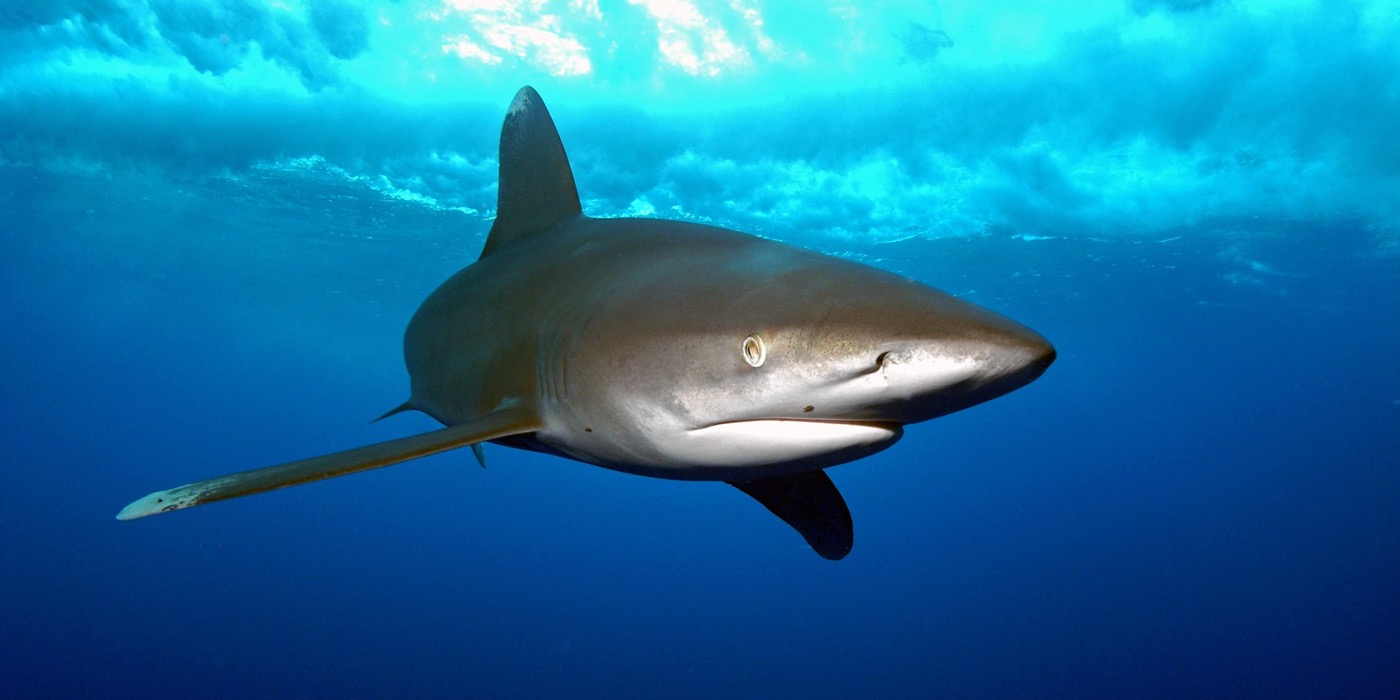 Important announcement about the closure of Brother Islands. Regarding closure of brother Islands, HEPCA was informed by the closure decree of the Brother Islands, based on official request by National Parks. To make it clear for everyone, the closure is not to hide a planned crime scene for sharks or to investigate the reasons for the unusual change in shark behavior noticed recently, simply because the case is very obvious: the practices of some safari Boats operating in the areas are not any more tolerant by nature. Overuse of the diving reefs and bad practices are not just restricted to the Brother Islands but it mostly everywhere, and the only way to mitigate the current impact is to follow simple rules that was announced thousands times before and is in the bylaw that all boats have it on board As we are certain and also after consultation with Shark Project organization, the situation is not only in Brothers but it is every where, and the only solution for timebeing as short term plan is to stop the unsustainable practices like fishing, feeding and disposal of organic material. Here are some do’s and dont’s for the safety of divers in the water and we urge everyone to follow the following in every dive sites : Enjoy the unique chance to dive with predators Always follow the instructions of your Dive Guides. Never feed a shark or chum with fish, fish-blood or organic waste. This creates a dangerous situation due to possibly irritated senses, competition or conditioning. Keep in mind that there is always the risk of an accident, especially if you do not follow the rules: Do not show fear, but be respectful Avoid quick movements, even when sharks come very close Stay in an upright position and avoid uncontrolled quick kicks Keep your hands close to your body Stay close to your group, sharks investigate individual divers more intensively Always keep eye-contact with sharks investigating you close - they come back soon Be aware that sharks like to approach from the back  Overlook the whole situation (3D!) - buddys can even do it better together Know where all the sharks are (especially when filming or taking pictures) - any time you feel uncomfortable leave the water controlled together with your buddy Never touch a shark or molest it, try to keep a distance of minimum two body lengths If a shark gets very close push water against it (or a camera, Shark Stick etc.) - as soon as a shark touches you, stay calm and keep your eyes on the shark, leave the water still keep an eye on the whole situation when ascending and getting back on the boat If you find out that there is food or bait in the water (this could be from a different group, organic waste from a boat or natural prey) Warn your dive guide and the other divers and leave the water Never touch the bait or get close to it Never be in the chum line (sharks normally approach against the current) Report to HEPCA with pictures/Videos if you have. Again ; Feeding, fishing or harpooning is strictly forbidden by Law and strict legal actions will be taken against violators 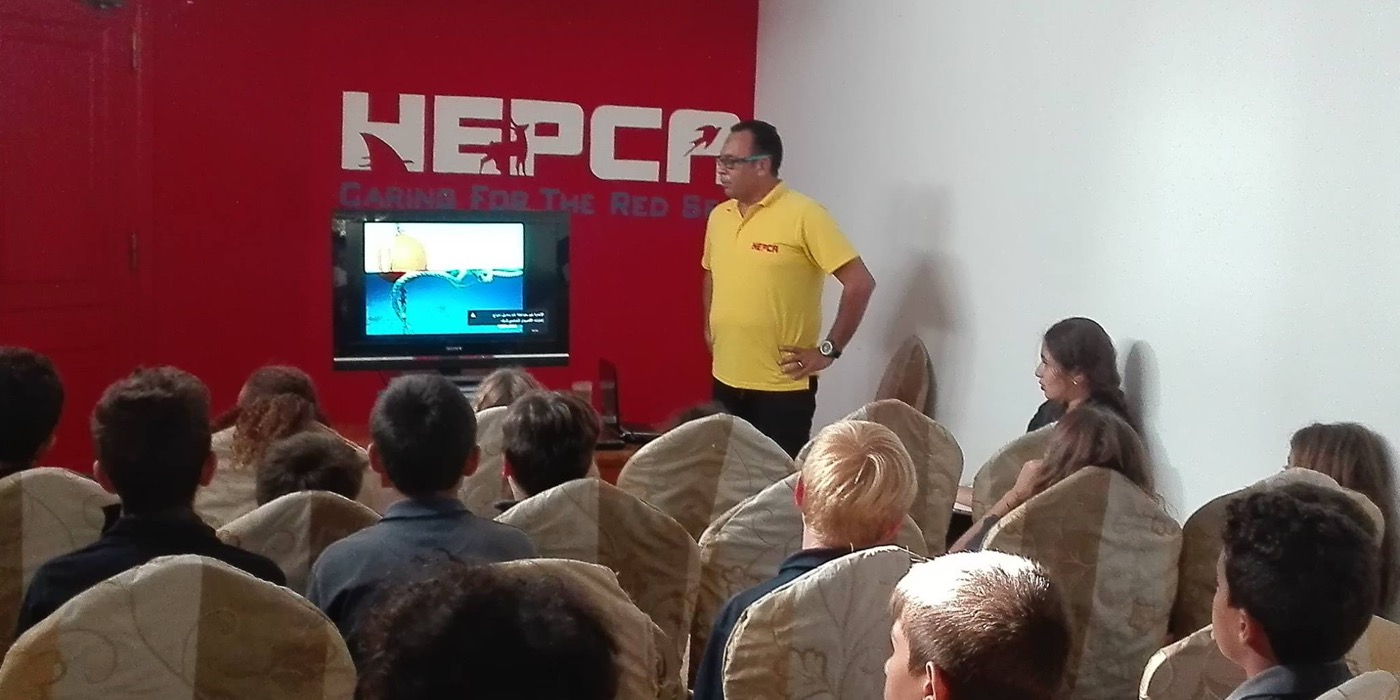 HEPCA and Deutsche Schule Hurghada took the initiative to implement the “No Plastic” campaign for Red Sea language schools’ students to create awareness about the danger of Plastic on the Red Sea Eco system. The lecture first started by giving information about the Red Sea Eco system, followed by the damages occurred in the past years from using “Plastic” on marine life that is affecting all sea creates and consequently affecting all human beings, then gave the solution of using alternative organic materials to protect the environment.  The “No Plastic” awareness campaign is for the duration of one week for all students of the following schools; French School, Saint Josef, Saint Rise, and our partner in this initiative The Deutsche Schule Hurghada.  The “No plastic” campaign will continue for other schools in the coming weeks to create awareness on more target audience. 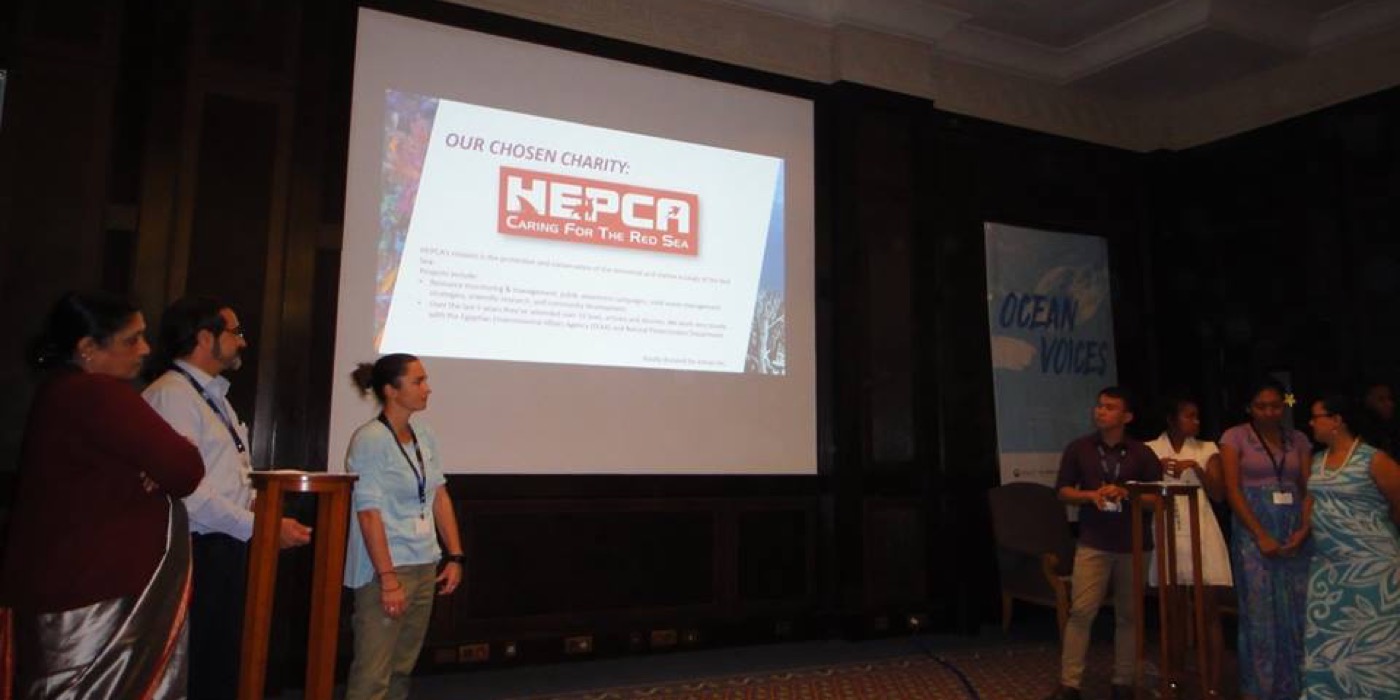 HEPCA was nominated by the The Secretariat of Convention on Biological Diversity (CBD) as a leading association in the field of biodiversity protection and community development. The nomination was announced during the celebration of the Day of Ocean Sustainability, in view of its pioneering activities in nature protection and conservation of the Red Sea biodiversity.  Such recognition, no doubt, demonstrates the reputation of HEPCA not only at the national level, but also at the international level, which is in addition to Egypt's international reputation and its ability to preserve the unique resources of the Red Sea, which are unique treasures of concern to the whole world and not only Egypt.  We thank all those who care, help and preserve our natural resources in the Red Sea. We rely on you and your help and support in protecting those resources. 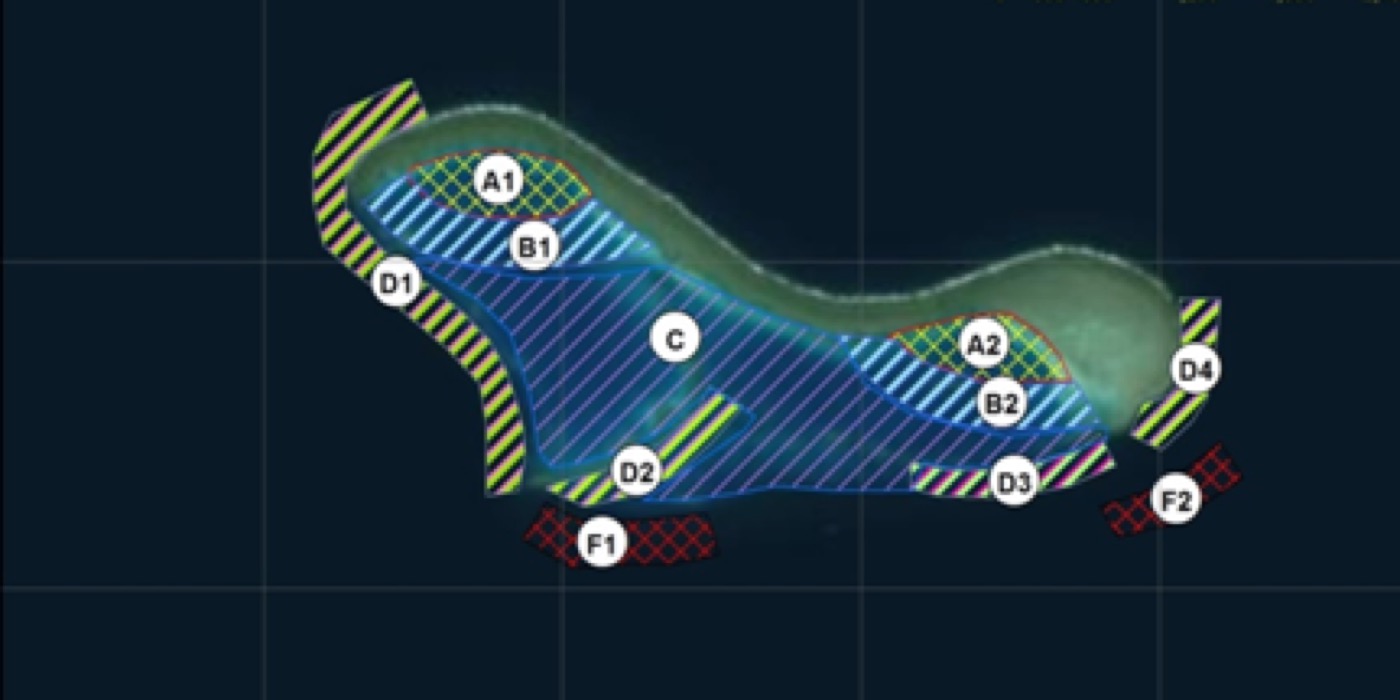 A Management Plan for Satayah Reef

Following the conservation success of the management of tourist activities and visits in Shaab Samadai (Dolphin House), HEPCA in cooperation with the EEAA has started work on the implementation of a management plan for Shaab Satayah (Dolphin Reef). The plan has been drawn up by Mr Mohamed Ismail, Assistant Lecturer at the Faculty of Science, Port Said University under the supervision of Professor Mahmoud Hanafi, our scientific consultant. Over a 1.5 year period a survey was carried out as a basis for the plan, which showed encounters with dolphin groups at Satayah between 91-100%, with an average of 93%. The presence of the groups is usually found on a daily basis during the summer months. Satayah Reef represents a resting zone for groups of dolphins for certain activities during the daytime, while at night they go out to hunt and find food. The size of the groups was between 23-112 dolphins, with a daily average of 58 dolphins. The main resting points are between two areas: A1 and A2 in which it was found that the dolphins spent 62% and 26% of the time respectively. Dolphin births usually take place during July and August each year. The main purpose of the plan: To conserve the dolphin population living in the area To prevent the wrong behaviour of the visitors and reduce the number of visits to the areas where dolphins most use to rest. To encourage active community engagement and participation in the management plan from the outset. Together, the EEAA and HEPCA have set a zoning plan for Satayah, which divides the reef into 4 main areas as follows: Zone A1 & A2: Absolute Protection Zone. These are two shallow areas in the north east and south east parts of the main coral reefs of the Satayah area, no more than 4m in depth. Surveys showed that dolphins remain in Zone A1 up to 61% of the time, and A2 up to 26% of the time. They therefore represent the main areas of comfort and relaxation of Spinner Dolphins in the area. The width of the zone is up to 350m (A1) and 150m (A2).  Under the new plan, these two areas will be completely off-limits to all activities except scientific research with prior authorisation by the Wadi El Gimal-Hamata administration. They are absolute protection zones, representing the heart of the managed area. Zone B1 & B2: Snorkeling Zone (Second-Level Protection) This consists of two zones adjacent to the Absolute Protection Zone (A1 & A2) where no dive or boat movement activities are permitted. Each one is 200-250m in length. Snorkel activities and scientific research are permitted. Zone C: Swimming and Snorkeling Zone In these areas snorkeling, diving and scientific research are permitted away from the interior. The movement of small boats (zodiacs) is permitted at a speed not exceeding 10knots per hour. Zone D: Diving Zone These areas are for diving on coral reefs outside the inner area. Zone F: Tourist Boat Anchorage Zone Anchoring and docking is only allowed in these specific zones. The zoning plan is applied due to the unsustainable practices being carried out, and the harassment of the spinner dolphin population in the area, as well as the potential safety issues for swimmers, snorkelers and divers. This initiative has been discussed by HEPCA and the EEAA in cooperation with the CDWS. They strongly supported the survey conducted by the Financial Sustainability Project with visitors, which included more than 1,000 visitors from different nationalities to determine their desire to pay visit fees and implement a management plan for the total area of Stayah, which showed that 100% of the respondents strongly support the implementation of the plan, more than 80% of them would be happy to pay a fee that ranges between 5 to10 euros per person per day. Finaly, HEPCA would like to thank everyone who participated in the preperation of the plan headed by Mr. Ahmed Ghalab, Director General of the Red Sea Protected Areas and Engineer Zuhair Khairuddin, head of the CDWS and all the diving centers and boat captains working in the southern region of the Red Sea.