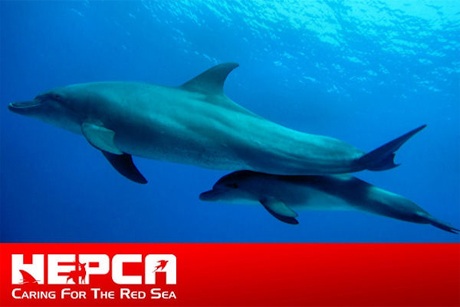 It gives us great pleasure to strongly commend the Governor of the Red Sea, General Mahmoud Assem, for his decision to protect the Indo-pacific dolphin (Tursiops aduncus) population in the Hurghada area. Over the past years the amount of stress exerted upon this population by the tourism industry has been phenomenal, with unregulated and unsustainable dolphin watching and swimming-with activities happening on daily basis. The first step for the protection of this species has just been taken: the Red Sea Governor’s Decree 379/2011 has established the south western area of Fanous Reef as a “safe zone” where all vessels, large and small, are banned from entering at this sensitive ecological hotspot. Diving and snorkeling activities can take place within the “safe zone” as long as best practices for dolphin watching are abided by (you can find the general guidelines for dolphin watching on HEPCA’s website). This much needed decision was taken after the harassment of dolphins in the wild in the past had become far too prevalent at Fanous Reef; vessels posed a serious threat to dolphins as well as snorkels and divers at the site. The new safe zone decreed by the governor will provide a sanctuary for the dolphin population and allow visitors to interact with them in a healthy and safe manner –with no associated fees-, at a location that is considered to be a critical habitat as it is regularly used by Indo-pacific bottlenose dolphins for socializing and potentially resting. The safe zone is displayed on the map below and the HEPCA mooring team shall place demarcation buoys to signify the boundaries of the “safe zone” within the coming week. We ask all operators to conform to this decree and report any witnessed violations via the HEPCA website. This milestone achievement is the fruit of the local community’s care and attention for conservation of key species, in particular it is most due to the information on dolphins’ presence and ecology collected within a long-term scientific project carried out by Angela Ziltener and supported by Mashrabeya Diving Center. For more information about the research efforts undertaken in Hurghada area, please check the DolphinWatch programme on HEPCA website. 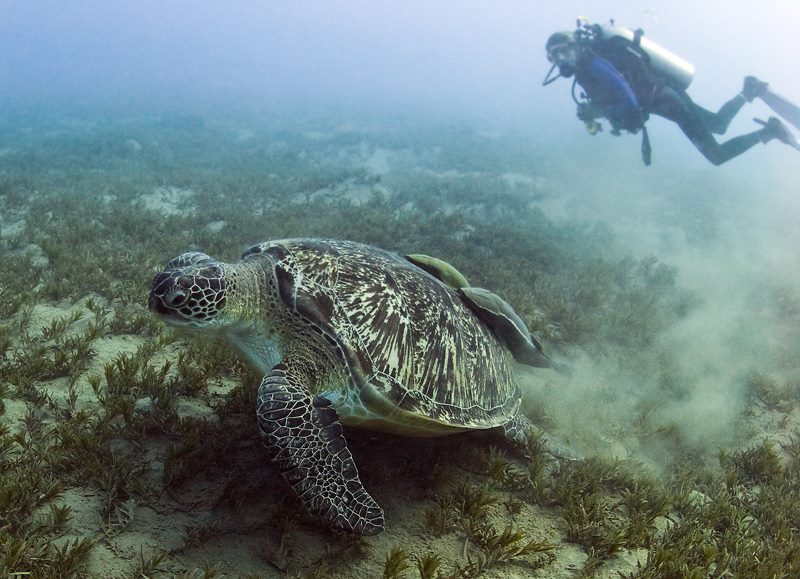 In ecology, it is fundamental to be able to identify individuals within a population as this provides realistic estimates of the population size, growth rates and also migration patterns. This information is central to the development of wildlife management plans and thus it is fundamental for the conservation of the species. With marine turtles, the most frequently used technique is the flipper tagging, which consists in putting a numbered ring on the rear flippers of the animal. This method usually requires the capture and handling of the animal and has also the inconvenience that the tags can get lost because of incorrect application or because they have been bitten off. An alternative to attaching markers to wildlife is to use visual identification of individuals. This is commonly done for example with dolphins where the shape of the dorsal fin and/or the presence of marks and scars allow researchers to identify each individual. This technique has some obvious advantages: animals are not physically captured (so they are not stressed) and their behavior is not affected by the identification system. Photographic identification, in which researchers photographically capture these natural markings to identify and re-identify individuals, has proven to be a useful tool in long-term monitoring of wild animal populations. In sea turtle research, this method is quite new but has already proven to be effective when marine turtle populations are easily accessible to snorkelers and divers. In its effort to increase the scientific knowledge of marine turtles of the Egyptian Red Sea and to improve their conservation, HEPCA started the first catalogue of these animals. The catalogue is a joint effort between HEPCA, dive centers and visitors. At present pictures are being collected from different sources. This catalogue has many aims: 1) provide a long-term photographic database that is updated once per month; 2) involvement of different sectors in sea turtle conservation and 3) it can be used as a tool to spread awareness among different users. The catalogue includes at present 21 individuals found from Shark and Yolanda reef in Sharm El-Sheikh to Wadi Gimal and will be soon available online on our website. The number of re-sightings is increasing every time more. HEPCA would like to thank all the dive centers and visitors that contributed to the catalogue with their pictures. 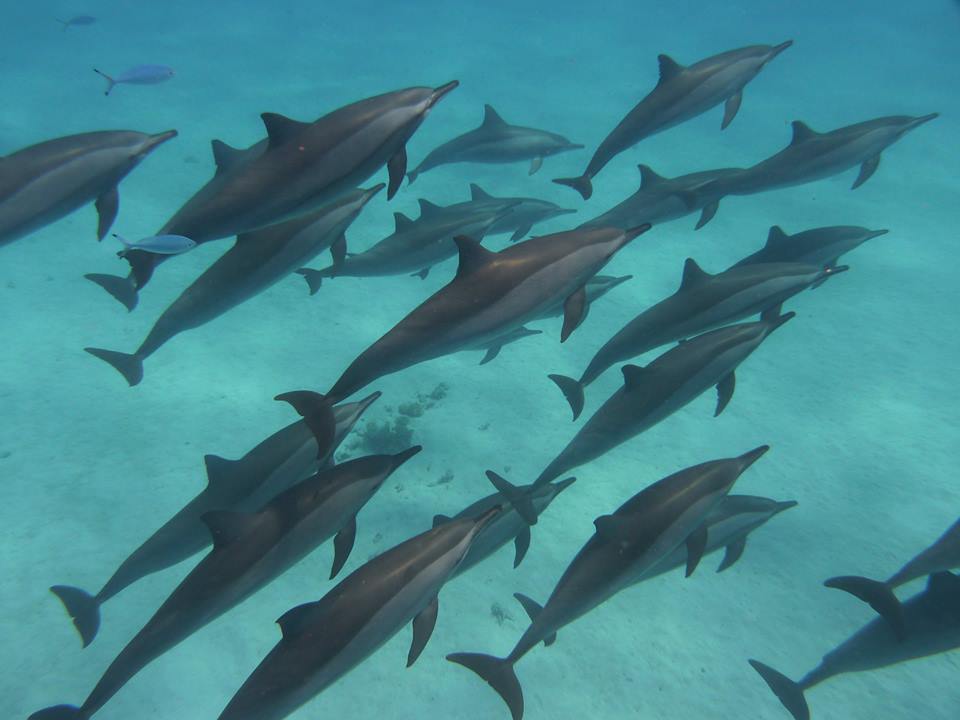 As regular happenings since last April, our RSDP Team has conducted its monthly surveys in Samadai Reef. With the four sightings recorded this month the dataset is becoming larger and larger, to an extent that in a few months first comparative analysis between the situation recorded in 2006 and in 2011 will be possible: a preliminary assessment of the population will be made for the very first time after the institution of the protected area. Some figures from the last monitoring: four encounters in five days, small groups ranging from 10 to 30 animals, pods composed by females and calves mainly. And some astonishing figures: one newborn spotted in two occasions, an unusual event as the presence of newborns is known to peak in July and August. And 294, the number of guests and visitors briefed by HEPCA researchers during their permanence in Samadai. The team would like to thank Red Sea Diving Safari in Marsa Nakari for the support as well as all crews and dive centres that contributed to make all this happen once again. See you next month! 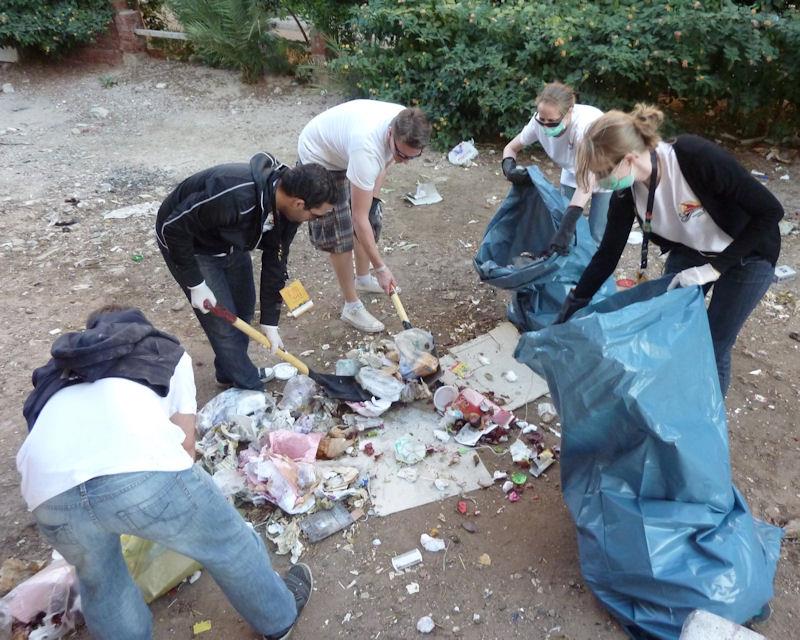 Rotaract originally began as a Rotary International youth program in 1968 and has now grown into a major Rotary-sponsored organization of over 7,000 clubs spread around the world. It is a professional service, leadership and community service organization for young men and women between the ages 18–30. Rotaract focuses on the development of young adults as leaders in their communities and workplaces. Clubs around the world also take part in international service projects, in a global effort to bring peace and international understanding to the world. Interota, a worldwide Rotaract meeting held every three years, is organized and sponsored by Rotaractors. It provides Rotaractors with a forum for sharing ideas, concerns, and experiences with other Rotaract club members around the world. This year the Interota was held in Makadi Bay from the 18th-22nd of November. Part of the conference was a service project which had been organised together with HEPCA. On the 21st of November more than 100 people from around 30 different countries did a cleanup in Bata, a residential area in Dahar (Hurghada). Part of the service project was also the installation of new bins in the area and an awareness campaign teaching the locals more about environmental protection and the necessity to dispose their rubbish correctly. HEPCA would like to thank the team of Rotaract for their great work and their exemplary commitment. It was a real pleasure meeting you!